7.7b Exceptions to Zaitsev's Rule for E2 Reactions 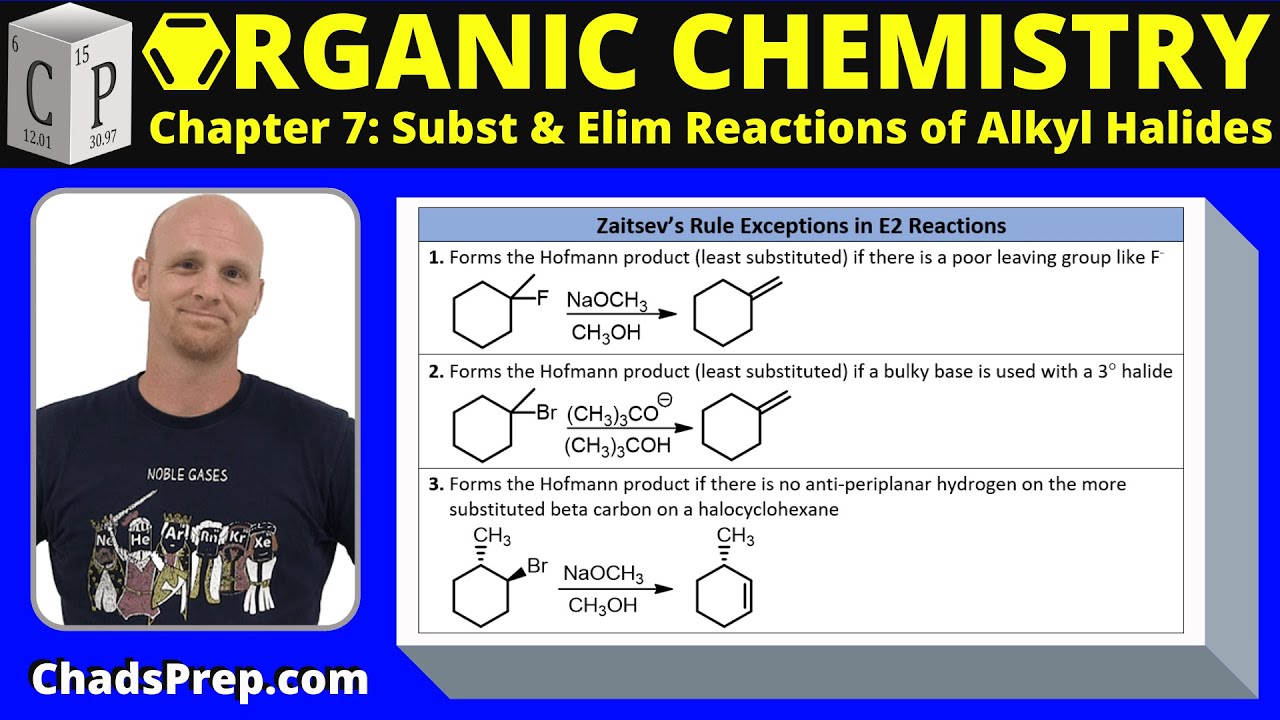 Zaitsev's Rule (also spelled Saytzeff's Rule) is used to distinguish the major elimination product(s) when more than one are possible.  The elimination reactions we will specifically consider here are dehydrohalogenations resulting in an alkene.  Dehydrohalogenation involves losing a hydrogen and a halogen from adjacent carbon atoms (usually) in a molecule while forming a pi bond.  The carbon atom bonded to the halogen is referred to as the alpha carbon.  All adjacent carbon atoms are referred to as beta carbons and the attached hydrogen atoms as beta hydrogens. 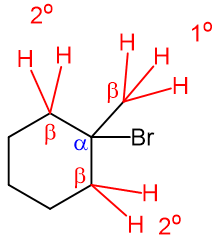 There are three beta carbons: two are secondary carbons and are equivalent and the third is a primary carbon.  Zaitsev's Rule predicts that the alkene formed when deprotonating either of the secondary carbons will be the major product (referred to as the Zaitsev product) whereas the alkene formed when deprotonating the primary carbon will be a minor product (referred to as the anti-Zaitsev or Hofmann product) as is the case in the E2 Elimination reaction below:

While both E1 and E2 Elimination reactions generally follow Zaitsev's rule, there are four notable exceptions for E2 reactions:

1. Using a Bulky Base

2. No antiperiplanar beta hydrogen on cyclohexane

1. Using a Bulky Base (with a Bulky Halide)

While there are several bulky bases that are used in E2 reactions in practice, the most common by far is t-butoxide.  For many classes, this is the only bulky base they are presented with and I show three ways it is often represented below:

Below we can see the difference in the major product in the E2 elimination reaction when a tertiary halide is treated with NaOCH3 (typical strong base) vs t-butoxide (bulky base). The Zaitsev product is the more stable product and is therefore the Thermodynamic Product of this reaction (a term you may learn later).  Due to the size of t-butoxide, it is considerable 'easier' for it to deprotonate the less substituted beta carbon and therefore the anti-Zaitsev product will form with a lower activation energy.  This makes it the faster-forming product and therefore the Kinetic Product (another term you may learn later).  So we see that the less substituted alkene is the major product with a bulky base due to steric effects.


I'll conclude this section by showing some of the less common bulky bases.

2. No Antiperiplanar beta Hydrogen on Cyclohexane

For this E2 elimination there are two beta carbons having hydrogens: one 3o and one 2o.  Zaitsev's rule would form the alkene using the 3o carbon.  However, this Zaitsev product is not observed and the anti-Zaitsev product is the major product.  This can be best understood by examining the cyclohexane chair conformations.

It turns out the E2 mechanism with a poor leaving group still occurs in a single step.  But the poor leaving group leads to a 'delay' of sorts in this step which results in significant build up of negative charge on the beta carbon involved (highlighted in blue in the image below; *other partial charges are omitted for clarity).  This beta carbon is carbanion-like and as a less substituted carbanion is more stable, the transition state is more stable when the less substituted beta carbon is used.  The resulting lower activation energy explains why the anti-Zaitsev product is the major product with a poor leaving group.

In this reactant there are two beta carbons: one 2o and one 3o.  Zaitsev's Rule would have predicted using the 3o carbon to form the major alkene product, but the anti-Zaitsev product is the more stable product due to conjugation.  The E2 elimination mechanism for formation of the major product is shown.