5.1 Overview of Isomerism and Stereoisomers 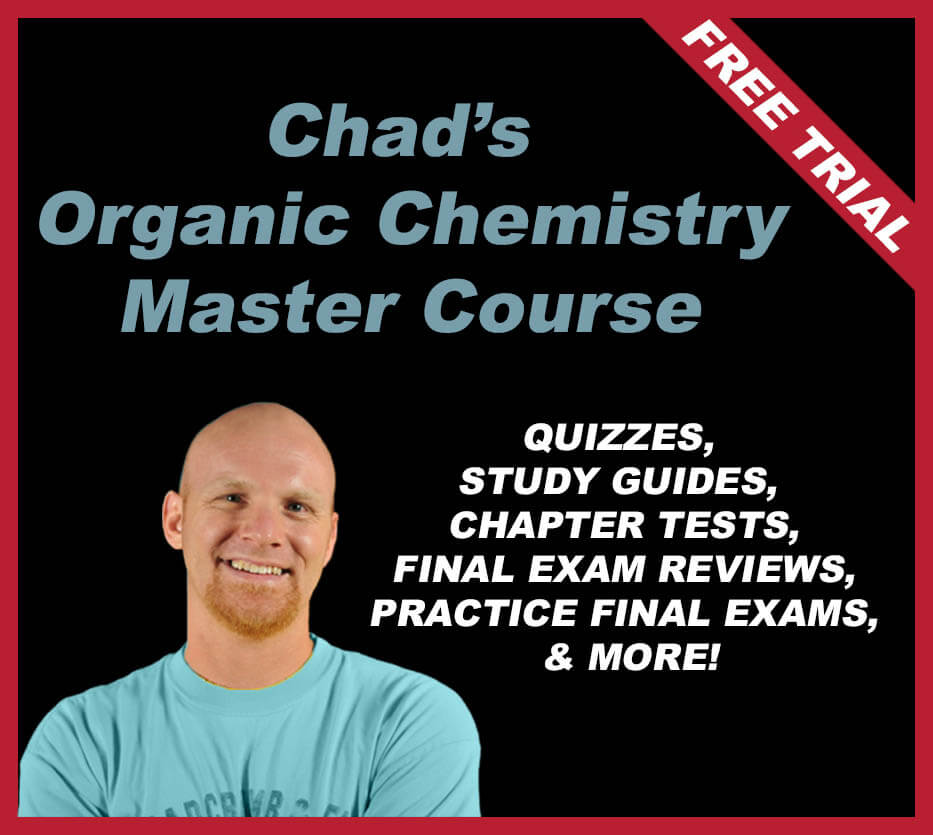 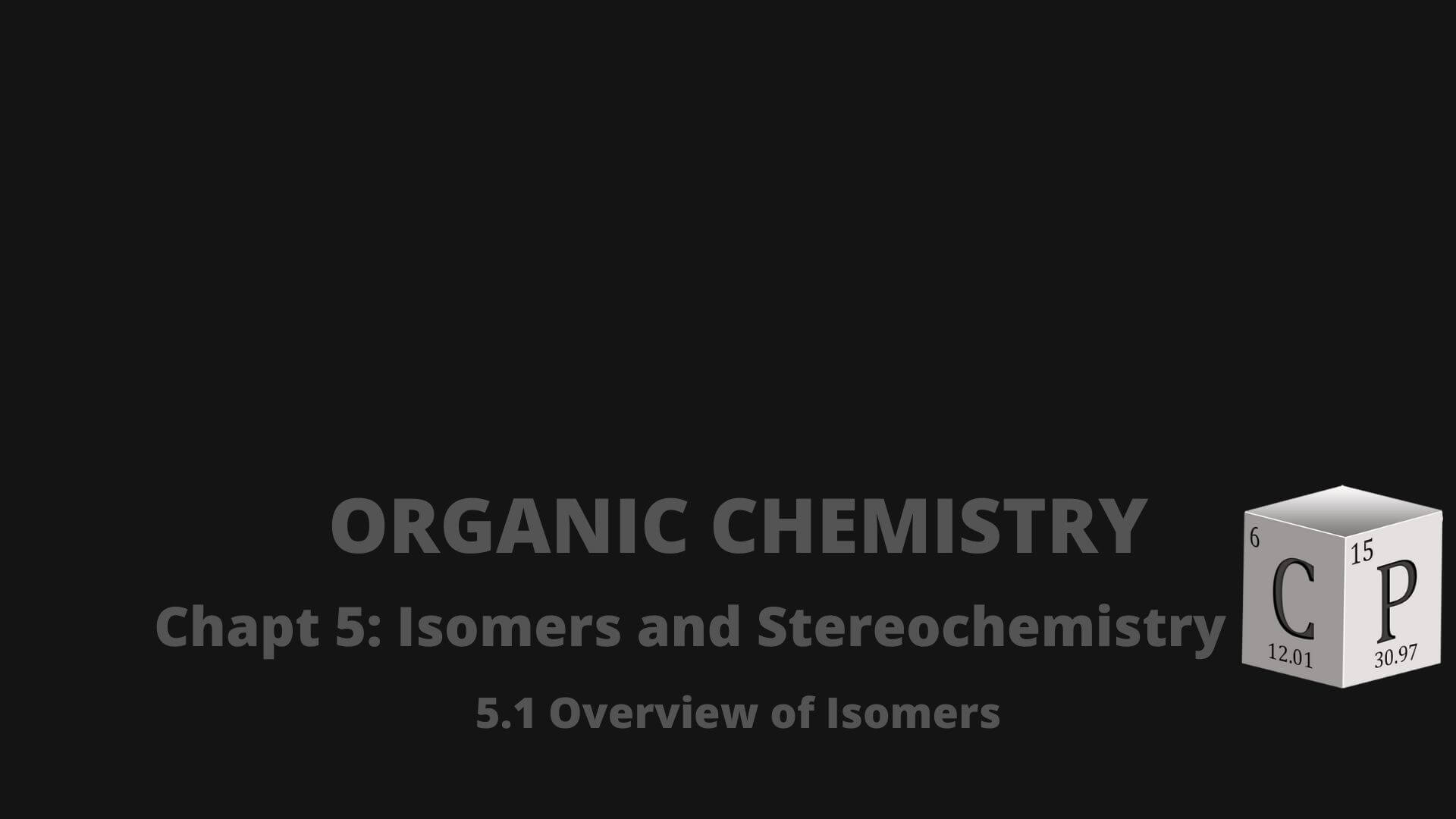 Constitutional isomers, also known as structural isomers, have the same molecular formula (i.e. are isomers) but have a different 'bond connectivity.'  Below are a couple of examples.

2. Stereoisomers having chiral centers - Most stereoisomers discussed in this chapter will fall into this category.

Stereoisomers having chiral centers may either be enantiomers or diastereomers depending upon the comparison.  Below are a couple of examples of stereoisomers.  You should notice that they all have the same bond connectivity and that this is also evident in their names; the only differences in the names of stereoisomers are stereochemical designations at the beginning of the names (cis vs trans and R vs S).  We'll learn how to assign R and S later in this chapter (5.2 Absolute Configurations: Assigning R and S) and a new designation for alkenes, E and Z, in a later lesson on naming alkenes (8.0 Naming Alkenes).

The mirror image of a chiral molecule is its enantiomer.

An example of a chiral and an achiral molecule are shown below: 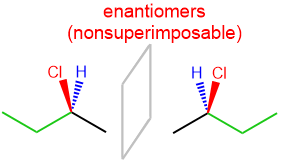 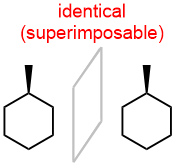 The vast majority of chiral compounds have chiral centers, and therefore when trying to identify a molecule as chiral one should look for the presence of chiral centers.  Though rare, we will learn in a future lesson (5.6 Amine Inversion and Chiral Molecules without Chiral Centers) that there are a couple of molecules that are chiral even though they don't have chiral centers.  This is a relatively minor occurrence and many undergraduates are never even presented with these examples.

So when trying to identify a molecule as chiral, start by looking for chiral centers.  But it turns out there is a trick for identifying achiral molecules as well: any molecule with an internal mirror plane of symmetry (often termed a sigma plane) will be identical to its reflection and is achiral.  There are no exceptions either.  If a molecule has a sigma plane, it is achiral.  If we revisit methylcyclohexane which was identified as achiral above we can readily identify a sigma plane.

However, a molecule only needs to have a sigma plane in any one of its rotational conformations to be achiral, and such a sigma plane may not be obvious.  In examining the molecule below on the left it may be difficult to recognize that it has a sigma plane.  Rotation around one of the C-C bonds makes it much easier to see.

The moral of the story is that it is not always straightforward to identify sigma planes.  Just because you can't find one don't immediately assume the molecule is chiral (though this is often true).  But if you do find a sigma plane the molecule is for sure achiral.  The example above is a meso compound fyi; it is achiral even though it has two chiral centers.

Light, with its wavelike characteristics can have its 'wave' oriented in any plane.  This is exactly the case with unpolarized light which has light in all possible orientations.  But when it is passed through a polarizing filter all orientations except for largely one are blocked.  The light that passes through is largely of a single orientation (plus or minus a few degrees) and is said to be plane-polarized.  If plane-polarized light passes through a solution of an achiral compound it will leave the solution with the same orientation with which it entered.  But when plane-polarized light passes through a solution of a chiral compound it will leave the solution rotated relative to the orientation with which it entered.  The degree of rotation will be dependent upon the identity and concentration of the compound and upon the path length of the solution, but the direction it is rotated is intrinsic to the particular enantiomer.  We'll get more into the numbers regarding this later in the chapter (5.7 Optical Activity).

Enantiomers always rotate plane-polarized light by the same degree (assuming equal concentrations and path lengths) but in opposite directions, and this can be used as an identifying characteristic for the two enantiomers.  The direction and degree of rotation is measured by a polarimeter.  The enantiomer that results in rotation to the right (clockwise) is termed the '+' or 'd' isomer (d is short for dextrarotatory).  The enantiomer that results in rotation to the left (counterclockwise) is termed the '-' or 'l' isomer (l is short for levorotatory). 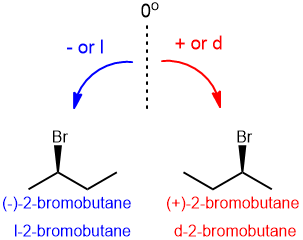 A chiral molecule is one that is not identical to its mirror image, but it is often technically defined has having a nonsuperimposable mirror image which we identified in the last lesson as its enantiomer.  And molecules don't have the monopoly on chirality as many objects from our every day experience are chiral, most notably our hands. 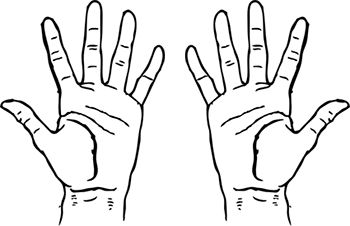 Our hands are reflections of each other but are not identical.  That's why both right-handers and left-handers baseball gloves are produced.  They are made unique to the hand they'll be worn on depending upon whether the player is right-handed or left-handed.  In fact we often loosely distinguish between a pair of enantiomers by referring to one as the right-handed enantiomer and the other as the left-handed.


But enantiomers are difficult to distinguish from one another as all of their physical properties (melting point, boiling point, dipole moment, etc.) are identical.  In fact it takes a chiral environment to distinguish between the right-handed and left-handed versions of a chiral compound.  (As baseball gloves are made specific to the right hand or left hand, they too are chiral.)  A great many drugs are chiral and often it is only one of the enantiomers that possesses the desired activity.

The most infamous example of a chiral drug is thalidomide, a sedative that was often also prescribed to pregnant women in the 1950s to treat morning sickness.  It turns out it was the R-isomer that was responsible for these effects.  However, the drug was sold as a racemic mixture, and unfortunately the S-isomer acts as a teratogen causing birth defects.  What you should take away from this is that proteins themselves are chiral and are often found to bind one enantiomer more strongly than another as is the case with thalidomide.  Quite a bit of research regarding thalidomide has been performed and those interested can read more in a great article in Nature.

The compound and its mirror image are not identical (i.e. are nonsuperimposable).  If we take and rotate the molecule on the right 180o out of the plane of the page you can see that the Cl and H are not in the same position. 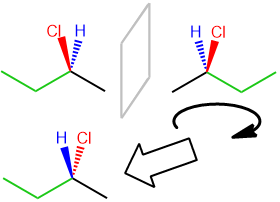 After rotating the second enantiomer we can see that the ethyl group (green) and methyl group (black) line up and are superimposable.  But the Cl and H are not superimposable.  The only difference between the molecule on the upper left and the molecule on the lower left is that the atoms bonded with the wedged and dashed bonds are switched.  In fact this is at the very heart of the term stereocenter.  A stereocenter is an atom where switching two groups results in a different stereoisomer.  And it is not limited to switching the wedged and dashed bond (though this is the most common); switching any two groups on a chiral center will get you the other version.


This now gives us two ways to recognize when we have the reflected version of a chiral center:

1. When it is simply drawn as a reflection.

2. When two groups have traded places on a chiral center (groups attached with wedged and dashed bonds switched here)

Both of these will be important in learning how to recognize the exact relationship between two molecules which we'll be addressing in a lesson later in this chapter (5.5 Isomeric Relationships Between Molecules).

How to Identify Chiral Centers

1. Chiral centers must be tetrahedral atoms (sp3 hybridized), so eliminate all atoms that are sp or sp2 hybridized from consideration.  There are 8 sp2 hybridized carbon atoms in this molecule and I've crossed them out below.

4. Examine the remaining atoms to see if they are indeed bonded to 4 different things.  At this point there are only three carbon atoms remaining to examine (the oxygen atom is sp3 hybridized but 2 of its 4 electron domains are lone pairs of electrons and it won't therefore have 4 different groups).

We'll examine the remaining atoms one at a time. 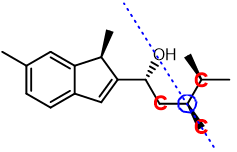 And there you have it; this molecule has 3 chiral centers (circled in blue in the image below).

Chiral centers don't necessarily have to be carbon, but there are two reasons most of the examples you'll see in an organic chemistry course will be.

1. This is organic chemistry, the chemistry of carbon.

2. Carbon can make 4 bonds and most other atoms you're likely to find in organic molecules usually don't.  This limits the possible atoms that might be bonded to 4 different things.

But one of the 4 different things an atom is bonded to doesn't actually have to involve another atom or a bond; 1 of the 4 things can be a lone pair of electrons.  We'll see something unusual with nitrogen for many amines at the end of this chapter (5.6 Amine Inversion and Chiral Molecules without Chiral Centers) so I'll ignore nitrogen for now, but check out the following ion in which sulfur is a chiral center.  The sulfur atom is bonded to the carbon of a methyl group, the carbon of an ethyl group, the carbon of a propyl group, and has a lone pair of electrons. 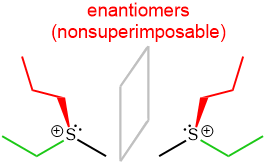 Now that we know what a chiral center is and how to identify them, we'll learn how to assign absolute configurations, R and S, in the next lesson (5.2 Absolute Configurations: Assigning R and S).